It seems incredible to me that Wing Beats, the book of haiku about British birds which I co-wrote and edited with John Barlow is now 10 years old. It began as a dual collection between the pair of us, but we opened it up to submissions, so that we could include haiku by most of the best haiku poets in Britain who were writing at the time – such as Pamela Brown, David Cobb, Keith Coleman, Caroline Gourlay, Martin Lucas, George Marsh, Matt Morden, David Platt, Stuart Quine, Helen Robinson, Fred Schofield, Ian Storr and Alison Williams – and the book was unquestionably much richer and more varied because of their contributions. 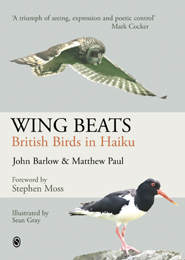 We were fortunate enough to have the encouragement and endorsement of the writer, broadcaster and TV producer Stephen Moss, who wrote the introduction and then generously included the book among his nature books of the year in The Guardian, and of the great nature writer and Country Diarist Mark Cocker.

On re-reading the book, I reckon that some of the haiku, especially some of my mine, wouldn’t pass cut the mustard were we editing it today, but I’m proud of it still, not least because of its lasting influence on English-language haiku as a counterweight to much of the cryptic, frankly unintelligible stuff which is peddled as ‘good’ haiku in some haiku journals and on social media, particularly Twitter.

John put a huge amount of effort into the book, in terms of both content and design: his 127 poems; the six remarkable, scholarly appendices which constitute the end-matter; the integration of Sean Gray’s beautiful illustrations; and the faultless layout and attention to detail. John is a genius whose devotion to haiku is acknowledged well beyond these shores. It was a true labour of love.

We co-wrote the introduction, but this sentence from it has the Barlovian imprimatur firmly upon it, “All the haiku in Wing Beats concern ‘real life’ experiences, ensuring the book has genuine value as a record of wild birds in Great Britain at the beginning of the twenty-first century”. I can’t argue with that.

Wing Beats is still available over on the Snapshot Press website.

View all posts by Matthew Paul